About a dozen students and faculty members from Acadia attended the Atlantic Universities Geological Conference, held at St. Mary's University on 22-24 October. The event began with an opening harbour boat tour and Challenge Bowl, sponsored by the Canadian Society of Exploration Geophysicists. The Challenge Bowl is an annual quiz-show style competition pitting teams from each of the 6 participating Atlantic universities against each other in a knockout competition. The winning team was from Acadia - Leah Chiste and Alex Kaul - who won the privilege of going on to the national Challenge Bowl in a competition at GeoCanada 2010 in Calgary in May. The winners there will represent Canada at the International Bowl in Denver in June. 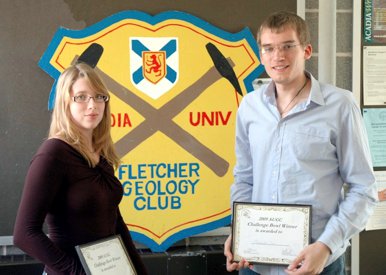 Friday was devoted to field excursions or short courses - choices of visiting Joggins UNESCO World Heritage Site, the Pope's Harbour Dykes on the Eastern Shore, the Canada-Nova Scotia Offshore Petroleum Board core lab, or research labs at SMU to investigate fluid inclusions in minerals. On Saturday, participants presented the findings from their undergraduate research - Alex Kaul presented a poster on his initial findings on the petrology of carbonatite intrusions in Namibia, and Trevor Brisco revealed his discovery of possible impact craters south of Bridgetown, NS.
26 October 2009

Donation from Dr. James Nowlan - microscope lab restocked
The Department of Earth and Environmental Science was fortunate to receive a donation from the estate of the late James P, Nowlan. The decision was made to use the money to purchase 17 new Leica transmitted light petrographic microscopes to replace the aging microscopes that have been the workhorses of the department for 30 years. The new microscopes were installed in early September, and a ceremony to mark the refurbished facility was held on October 16th in combination with other Acadia University "Homecoming" events. Dr. Nowlan was an Acadia geology graduate of 1928 at the age of 18, perhaps the youngest graduate (and certainly one of the youngest graduates) in the university's history. He had a distinguished career in the mining industry, and was NS Deputy Minister of Mines from 1958 until his retirement in 1973. He served as GAC president in 1964-1965. Dr. Nowlan died in 1986.
16 October 2009

Long term employees recognized
Four employees in the Earth & Environmental Science Department were recognised for their long terms of service at the annual Summer Assembly at Acadia. Both David McMullin and Cliff Stanley received their 10 year pins (although we all know David has been around a lot longer - it's 10 years since he started as instructor).  Linda Lusby and Don Osburn received their 25 year plaques. Congratulations to all!
24 June 2009

Linda Lusby appointed to ESANS Board of Directors
On 4 June Professor Linda Lusby was appointed to the Board of Directors of the Environmental Services Association of Nova Scotia, the Nova Scotia environmental business network. Recognizing her role as an active participant in national, regional and international standards organizations for many years, as chair of the Standards Council of Canada from 1998 - 2001 and in that capacity as representative for Canada on the Council and Technical Management Board of International Standards Organization (ISO), this appointment provides Linda with some closer to home opportunities to be a leader in the environmental industries of Nova Scotia. More details at http://www.esans.ca/board.html
9 June 2009

2009 Northeastern Section Meeting of the Geological Society of America in Portland, Maine. Edwin Escarraga (Acadia MSc Geology student) was awarded Third Place in the Graduate Student Poster Award Competition. Thirty-four graduate student posters were presented at the meeting and  Dr. Jean Crespi, Chair of the NEGSA section, noted that "the judges were very impressed by the overall quality of work presented, and the awards were very competitive." Congratulations Edwin!
Poster Information: Field relations, petrology, and age of Neoproterozoic granitic and syenitic plutons in the Antigonish Highlands, Nova Scotia, Canada.  by Edwin A. Escarraga, Sandra M.Barr, J. Brendan Murphy, and Michael A. Hamilton.
30 March 2009

The APICS Environmental Science Conference took place March 27 and 28 at the University of New Brunswick in Fredericton, NB. A strong group of undergraduate and graduate students from Acadia attended and presented 6 oral presentations. Sarah Haverstock took home the “best undergraduate student presentation” award (including a $200 prize). Good fun was had by all! 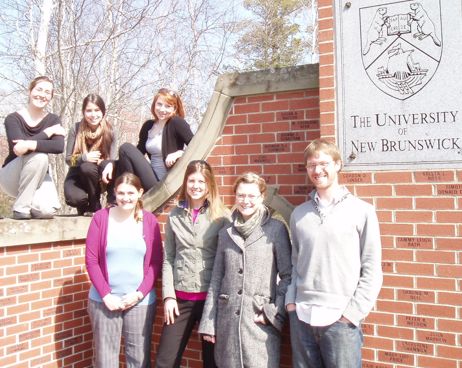 Acadia students win Graham Williams Best Poster Award at AGS Colloquium
Approximately 25 Acadia students and faculty attended the mid-winter Atlantic Geoscience Colloquium at Moncton on 6-7 February. The Acadia students were particularly conspicuous at the conference, showing up in the technical sessions, browsing the posters, and generally having a great time soaking up the geological happenings in Atlantic Canada. Stephanie Anderson and Jean-Luc Pilote both gave talks on their recent work, and Tim Collins, Edwin Escarraga, Tamara Moss, Pizye Nankamba and Meredith Roik presented posters. Congratulations to Tamara Moss who won the Graham Williams Best Poster Award, and to Edwin Escarraga, who was runner-up in this category!
9 February 2009

Sustainable Campus Conference, St. John's
RRecently, four students attended the Fourth Annual Atlantic region Sustainable Campuses Conference held this year at Memorial University in St. John’s, Newfoundland. Despite the weather which complicated both outgoing and incoming flights, Jennifer Herrick, Dewey Dunnington, Amy Buckland-Nicks and James Patterson were able to represent Acadia. The Sustainable Campuses project is a part of the Sierra Youth Coalition designed to implement the values and lobbying the Coalition does in the form of policy at the high school and university level. This year the conference featured keynote addresses by Elizabeth Weir, CEO of Energy Efficiency New Brunswick and Robert O’Brien, founder and director of OceanNET. Four sets of workshops focused mainly on projects that can be undertaken at the university level to engage students with a goal to improve university sustainability. Following the mix of workshops, conference attendees reconvened and launched into a Regional Strategizing session to identify areas where interuniversity action could be beneficial in helping facilitate some on-going initiatives and creation of new ones. Committees were formed on topics such as Sustainable Curricula, Bottled Water and Residence Challenges. This encouraged relationships with other universities and provided a network through which to organize regional action. Returning to Acadia from St. John’s, the four Environmental Science majors were inspired by the conference and hope to get the ball rolling on a few great ideas this term!
11 February 2009

For previously listed events in 2008, please go to the 2008 events archive.