The object of this walking tour is to show the surprising variety of building stones and other mineral materials that have been used in buildings on the Acadia University campus. The three natural rock categories* – igneous, sedimentary and metamorphic are all represented, as are manufactured materials such as several kinds of bricks, artificial stone made from crushed rock and cement and an unusual glazed terra cotta. Local quartzite has been used extensively and other local stones appear in foundations. Other stones have come from quarries throughout Nova Scotia, from New Brunswick, Quebec, Ontario, Vermont and Indiana.

*Sedimentary rocks: formed by deposition of particles weathered from other rocks – sandstone, or by precipitation of dissolved constituents - limestone. Fossils may be common, particularly in limestones. Clay, used in making bricks, is a sediment which has not become rock.

*Metamorphic rocks: formed by alteration of pre-existing rocks by heat and pressure – quartzite, slate, and marble. 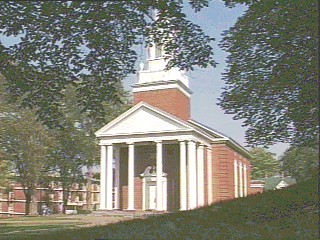 1. MANNING MEMORIAL CHAPEL was constructed in 1963 as a memorial to Fred C. Manning by his wife Gladys M. Manning and his daughter Marjorie E. Fountain. The chapel, in the "New England Colonial" style, was designed by Harold G. Wagoner with Ronald M. Peck as supervising architect and built by Annapolis Valley Construction.

The exterior is Chipman No. 1 tapestry red range brick manufactured by L.E.Shaw Ltd. Window sills and much of the outer decorative trim on the building are Indiana limestone, which is a light grey, oolitic and fossiliferous limestone. The bases for the portico and other trim on the front of the building was specified as "Scotia grey granite", a biotite granodiorite from Shelburne, Nova Scotia. The steps are of green Vermont slate. The interior window trim surrounding the stained glass window is Eureka Dan by Marble, supplied by the Vermont Marble Company. The railings, balustrades,  mouldings and other woodwork were done by two brothers, Beecher and Duncan Spindle, of Lunenburg County, Nova Scotia.

The building houses the inter-denominational chapel with a large meeting room in the basement and the office of the University Chaplain and Chapel Organist. During term there are two daily ecumenical services, Monday to Friday, a Roman Catholic mass on Saturdays, and a full University service on Sundays. In addition, the chapel building is used as a classroom, for rehearsals for drama productions, recitals and concerts. It is frequently used for weddings, funerals and memorial services. 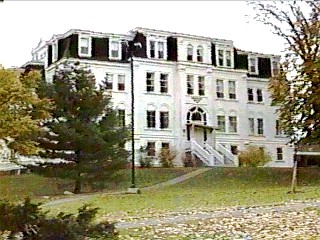 2. SEMINARY HOUSE, built in 1879, in the Victorian style, is the oldest surviving building on the campus. The architect and builder are unknown.

The upper part of the building is made of wood with the basement walls of stone. The corner stones of the basement of the building and the window surrounds on the front (north) side are red sandstone possibly from Mary's Point, Albert Co. New Brunswick. Other stones in the basement walls include yellow to buff Wallace sandstone from Cumberland County, Nova Scotia and fine grained grey sandstone and coarse grits, likely from the Glass Sand unit of the early Carboniferous Horton Bluff Formation, quarried near Hantsport, Nova Scotia. Local field stones include basalt from the Triassic-Jurassic North Mountain Formation and slate, probably from the Cambro-Ordovician Halifax Formation. 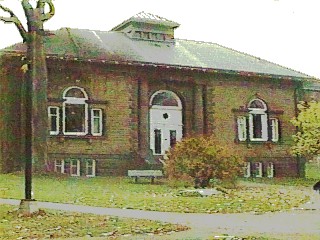 3. EMMERSON HALL, built in 1913, is particularly interesting for the variety of building stones used. Funds for the building, which was designed to be the university library, were donated by the family of Rev. R. H. Emmerson of Dorchester, N .B. The architect was Andrew R. Cobb, of Halifax. and the builder was James Reid, Yarmouth.

The most common stone, used exclusively in the lower walls and parts of the upper walls, the entrance including the pillars and in the door and window trim, is a red sandstone with some pebbles, mud-clasts and cross-bedding from Mary's Point, Albert Co., New Brunswick. Also in the upper part of the walls are two varieties of olive-coloured sandstone, one arkosic and the other micaceous. The source of these stones is unknown, but they are almost certainly not from Nova Scotia. Below the lower windows and between the upper and lower windows on the south side are vertical panels of yellowish, sandy, hand-made brick. The roof is of green slate*, probably from Vermont. Some, if not all of the stone was brought to Wolfville by ship - the Acadia Bulletin for September 1, 1913 notes that "several schooners of stone have arrived." The specifications required that the contractor haul the stone from the wharf to the building site and be responsible for any wharfage charges due to delays in removing the stone from the wharf. The copper shield over the entrance, made by Tiffany & Co.,  New York was donated by the architect.

In 1967 Emmerson Hall was converted to classrooms and offices for the School of Education. It is a registered Heritage Property.

*Subsequent to the publication of this guide, the roof has been replaced with roofing tiles. 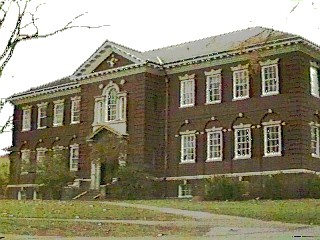 4. CARNEGIE HALL,  In 1906 Andrew Carnegle offered $30,000 toward a new science building, which was built in 1909. The architect was Charles Herbert McClare. The December 1909 issue of the Acadia Athenaeum provides an unusually complete description of the original structure which is in the "modified Georgian" style. The foundation, not seen, is of local sandstone, with the visible grass course and sills of grey granite, probably from Shelburne, Nova Scotia. The specifications called for the main facade to be of selected dark red New England water-struck brick. The remainder of the exterior walls and the interior brick partitions were to be of hard burnt Middleton sand-struck brick from Middleton, Nova Scotia. The belt course, windowsills and ornamental work are grey glazed terra cotta. The north entrance steps are light coloured granite of unknown origin. The roof is of dark Quebec slate, with copper flashings and ridges.

Carnegie Hall was originally built with lecture rooms and laboratories for physics, chemistry, biology and geology, and included a geological museum in the basement. It now houses Engineering in the older part. and the School of Computer Science in the extension, which was built in 1982. 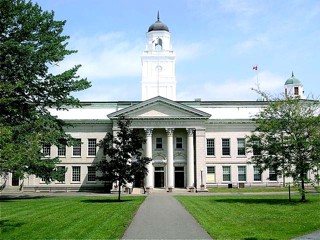 5. UNIVERSITY HALL  The foundation walls and the steps are of concrete faced with cast granite, an artificial stone which consists of crushed granite and Portland cement, formed in wooden moulds. Quartz and feldspar can be identified as well as some slate fragments. The walls of the building are of interlocking hollow clay tile faced with Benedict stone,  another artificial stone made of crushed marble and Portland cement, cast in sand moulds. The trim including the columns consists of the same material. Blocks used in the columns are over 2 m high and over 1 m in diameter at their bases. The ornamentation on the top of each pillar shows intricate detail of scrolls and leaves. It was likely formed from moulds constructed on-site.

The present building was completed in 1924 and is on the site of two previous buildings, both of which were destroyed by fire. The first building on the site was completed in 1854. Materials were contributed by people from the Annapolis Valley and adjacent mountains, from Halifax and Saint John, New Brunswick. The materials were moved from the wharf and the building was constructed by local, volunteer labour.   From this effort the symbol of the axe has been incorporated into the University crest and the name of the Axe lounge, in the Acadia Students' Centre. One of the major contributors to the campaign which included funds for the present building was John D. Rockefeller Jr., who pledged one dollar for every three from other sources until his gift reached $350, 000 The building contains Convocation Hall with seating for 1600 and houses the majority of the administration offices. The main computer centre is located in the basement. 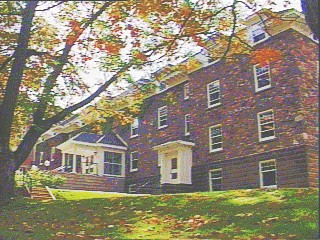 6. HORTON HOUSE, designed by Andrew R. Cobb in the Georgian style, was opened in 1915 as Horton Academy.  The lower part of the building, the steps and the trim consist of a buff to pink sandstone described as Wallace freestone, and from the quarries at Wallace in northern Nova Scotia. The upper walls are White Rock quartzite, of Ordovician to Silurian age, and quarried locally at White Rock.  The rock consists of a fine to medium grained mosaic of quartz with very minor mica. The quartzite is in irregular blocks with some vein quartz and is typically coloured by hematite along joint surfaces. A few pieces of vein quartz, and of mafic rock, are also present in the walls. The chimney above the roof line is Wallace sandstone.  Horton House is a co-educational residence. 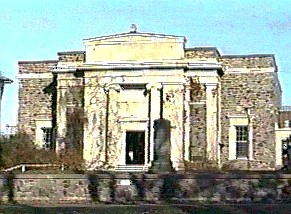 7. WAR MEMORIAL GYMNASIUM, The original part of the building was opened in 1919.  A large addition was built in 1967, and the Arena added in 1988. The 1919 plans were prepared by S.P. Dumaresq '99 of Halifax and Charles Wright of Wolfville was the builder.

The 1967 addition was designed by Leslie R. Fairn and Associates, in conjunction with Shepley, Bulfinch, Richardson and Abbott and built by V. C. Woodworth Ltd.  The brick infill on the addition to the building is a textured brick (Glasgow Mattex Brown range) manufactured by L.E. Shaw Ltd. Lantz, Nova Scotia. The memorial column is granite, probably from Quebec.

The building houses the classrooms and offices of the School of Recreation and Physical Education. It contains three gymnasia. two pools and a skating arena. The attached stadium overlooks Raymond Field.