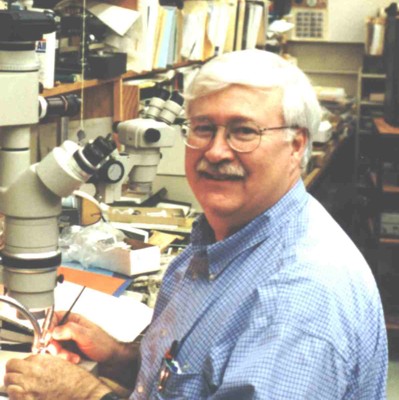 Dr. Barry Cameron passed away in late August this year after a protracted period of illness. Barry's career in the Geology Department started in 1981 when he came to Acadia from Boston University as department head. However, unknown to most people is that Barry was actually the first Nova Scotia-born head of Geology since Merle Bancroft who was head from 1923-1959. Barry was born in East Earltown, Pictou County, but moved to Massachusetts as a young boy.

Barry's career as a geologist began with graduation with a BA in Geology with distinction from Rutgers University, New Jersey, in 1962 where he wrote a thesis on the morphological variations of foraminifera. From Rutgers he moved to Columbia University in New York where he continued foram studies, this time from deep water near the Bahamas. Following completion of the MA in 1965 he continued at Columbia University, taking his PhD in 1968 under the supervision of Marshall Kay and John Imbrie where his thesis was "Stratigraphy and Sedimentary Environments of the Lower Trentonian Limestones (Middle Ordovician) of New York and Southeastern Ontario."

From 1967 to 1981 Barry worked at Boston University, as instructor, assistant and associate professor before becoming professor and chairman in 1980. His stay as chair at Boston was destined to be short, however, because upon the completion of George Stevens' 17-year term as head at Acadia, and with healthy enrolment numbers in Geology the university authorized an external search for a department head, effectively increasing the faculty complement in Geology from four to five. Under his headship the department increased again in size from five to six faculty with the appointment of Nancy Van Wagoner in 1983. (Rob Raeside's arrival in 1982 was as a replacement of Rupert MacNeill's position.) Through this period, Geology programs across the country were experiencing a boom, and Barry had the task of managing the coordination (and bills) for multiple labs in all the second year courses and a field school with 60 participants. He continued as department head until 1986 when he stepped down to become a professor with responsibilities for courses in paleontology, petroleum geology and oceanography.

Probably Barry's greatest legacy is the many students he mentored as budding paleontologists through his 24 years at Acadia. When he retired in 2005 he was thrilled to receive reminiscences from many of you who wrote to relate your experiences in the bowels of Huggins extracting microfossils from sand or limestone, or carefully angling thin beams of light to reveal a dinosaur or amphibian track on a massive slab of sandstone, carefully rescued from the beach.

Another significant legacy Barry has left us is the introduction of the course(s) in Oceanography. He pioneered a general first-year level course in Oceanography in 1984 with 30 students, which more than doubled in 1985 and doubled again 1986. From then till he retired, he never had an enrolment of less than 190 in the General Oceanography course, and equally high enrolments in a subsequently developed Coastal Oceanography course. In one year he taught over 800 students in the oceanography courses and we calculate that he probably taught fully one-third, and at times nearly one-half, of all the students who graduated from Acadia. Although the student reviews were mixed, dozens of Acadia Geology graduates owe their life's careers to that initial general interest course in Oceanography from Barry Cameron.

Barry is survived by his wife, Diane, and his daughters Heather and Charina. All his family were familiar faces around the department, with many science fair projects emanating from his daughters' desk in his office. Following very successful runs at the provincial and national levels in solar flare surveying and bee biology, both Heather and Charina completed degrees at Acadia, not surprisingly in Physics and Biology, respectively. Heather went on to study at the graduate level in Toronto, before returning to Acadia to complete a B.Ed. degree last fall, while Charina continued to a nursing degree and now works in Toronto.