Nine students headed off to Bermuda for the annual field course to explore modern and ancient carbonate rock environments. 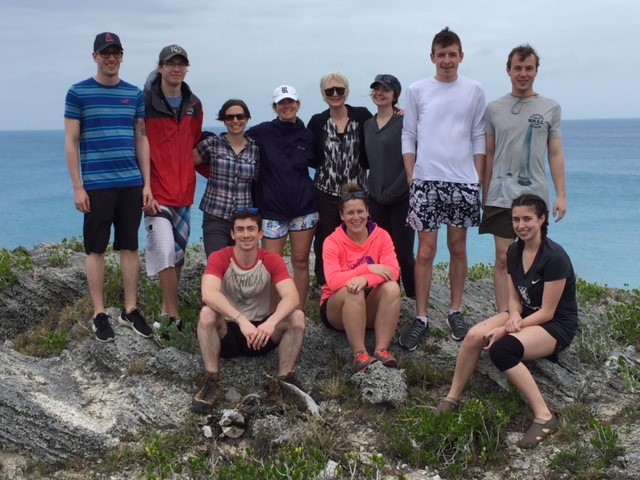 Acadia and Queen’s students hard at work in the lab at the Bermuda Institute of Ocean Sciences. 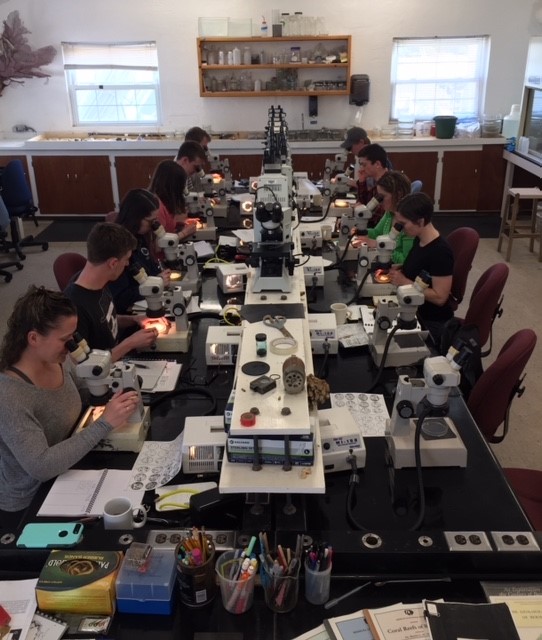 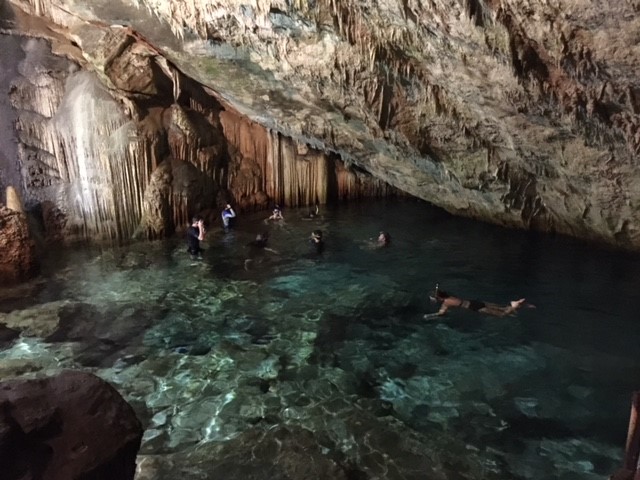 Dr. Melissa Grey, Curator of Joggins Fossil Institute, lectures about ecospace and how sedimentologists can apply it to understand biochemical facies. 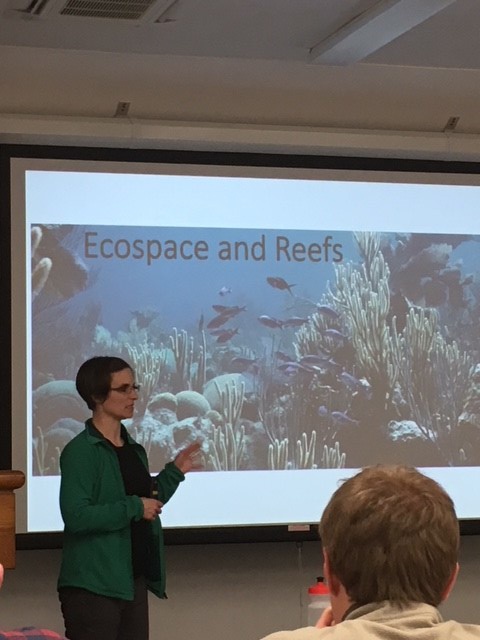 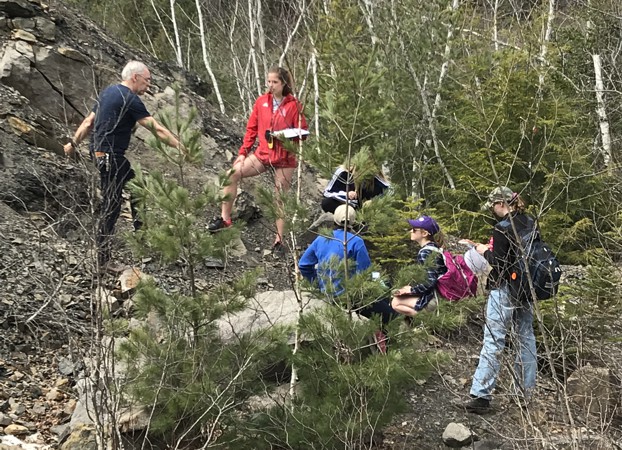 Term is over so now it is time for field school. Day 2 saw the crew heading out to Fall Brook to map the Glass Sand, surrounding shale and the unconformity on the Meguma Supergroup. Shorts and bare arms? Whatever happened to "it always snows at field school"? 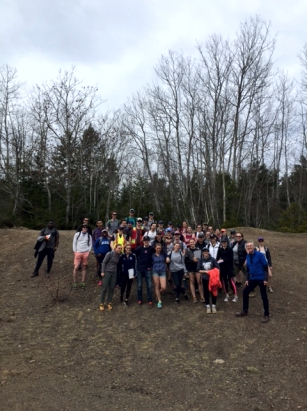 The whole group still happy on Day 2 at Fall Brook. No rain yet... 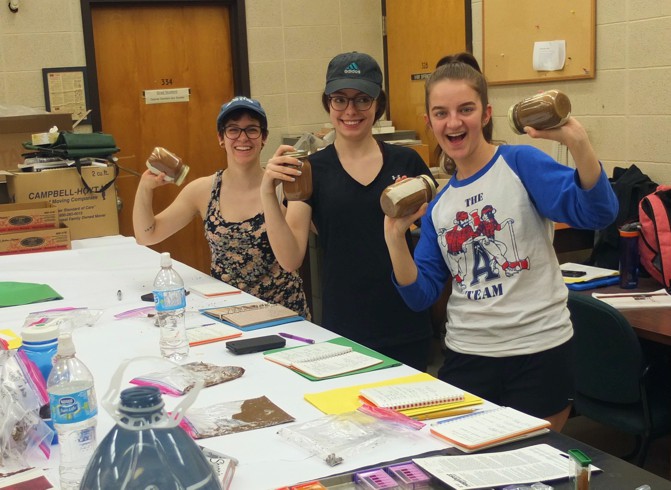 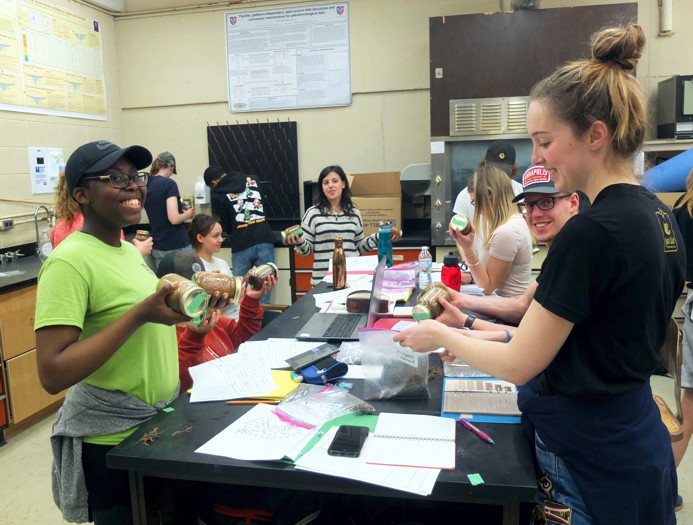 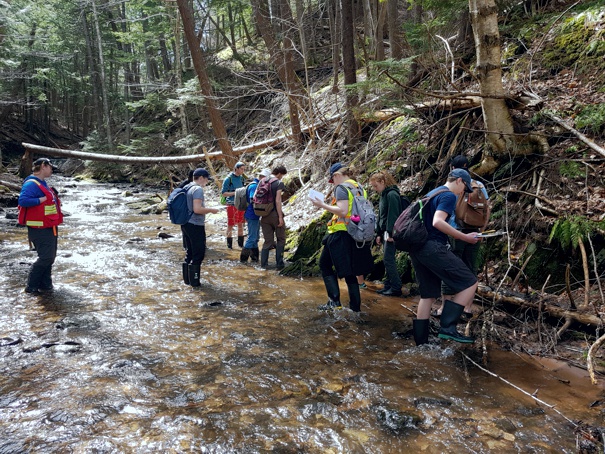 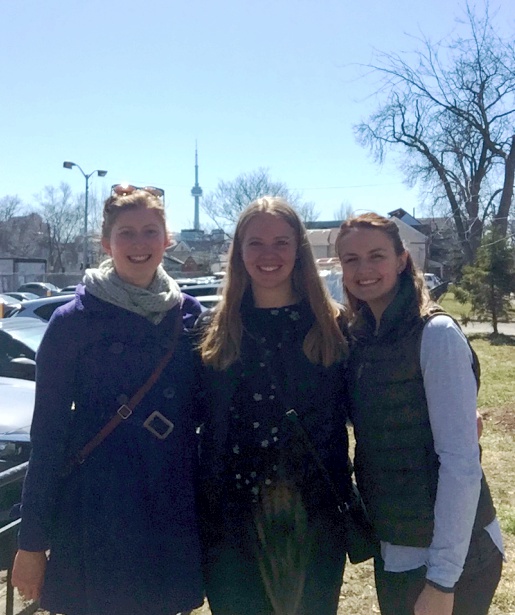 Yesterday, Emma, Sonya and I went out for brunch together, and thought we would send you a hello from Toronto! The three of us are currently living and working in the big city. Amanda is schooling at the University of Toronto, Emma is managing a non-profit business organization promoting sustainable investment practices, and Sonya is on a work term for her MBA in the downtown Toronto business district. It’s been wonderful catching up and exploring different parts of Toronto with Acadia pals. At the same time, it is hard to believe that 1-2 years ago (although feels like yesterday) we were in small-town Wolfville, and are now in North America’s fourth largest city! We are all doing well and enjoying this new phase of our lives, although we frequently reminisce about our days at Acadia and living in Wolfville. We are looking forward to visiting the East Coast sooner rather than later. :)

We hope that all is well in the Earth and Environmental Science Department and that you are getting some spring sunshine in the valley.

Every year students completing the Igneous Petrology or Metamorphic Geology courses have the opportunity to put their learning into action on the South Shore field trip. Led this year by Rob Raeside, the group visited locations in the Lahave River-Green Bay area where they met up with renowned photographer Peter Barss from West Dublin, who has been regaling his grandsons with stories from the rocks, appropriately annotated by Rob Raeside! 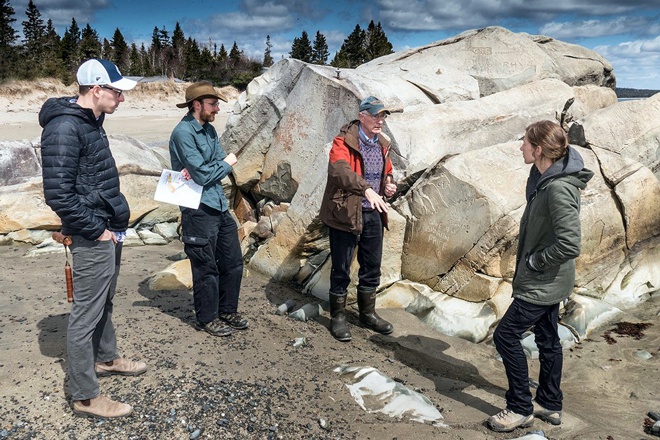 From the Green Bay area, the group proceeded south to the higher metamorphic grade rocks of Shelburne County, culminating in migmatites of Cape Sable Island and the intrusive rocks of the Shelburne and Barrington Passage plutons. Overnighting in Yarmouth, the second day saw them proceed along the western shore of Nova Scotia looking at the younger rocks of the White Rock Formation, although access to the outstanding outcrops at Cape Forchu had to be replaced by examination of the Cape Forchu Harbour breakwater as the Leif Erikson trail was closed for filming a movie. 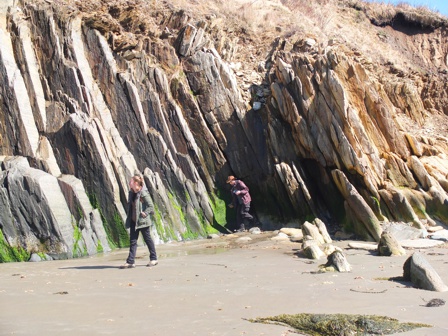 The trip was blessed with sunny weather and expansive beaches. Here students are examining the slate-tuff contact on the beach at Cape St. Mary.

Is it field work if it's under water?

Ian Spooner is spending early April in the  Whistler-Pemberton Valley, BC coring lakes as part of a country-wide investigation into atmospheric lead deposition. 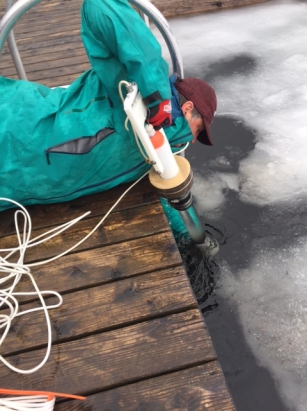 In this photo he is coring Lost Lake near Whistler, a lake that may also hold a record of fire history, an important component of ecological management in the region.

Progress continues on the renovations to Huggins Science Hall. As of the end of winter term, much of the frame of the building is evident, with final cladding up on much of the south face and east face brickwork complete. We eagerly await the final push-out of the corridors (and disappearance of piles of construction materials!) which will give us much appreciated space around the building. 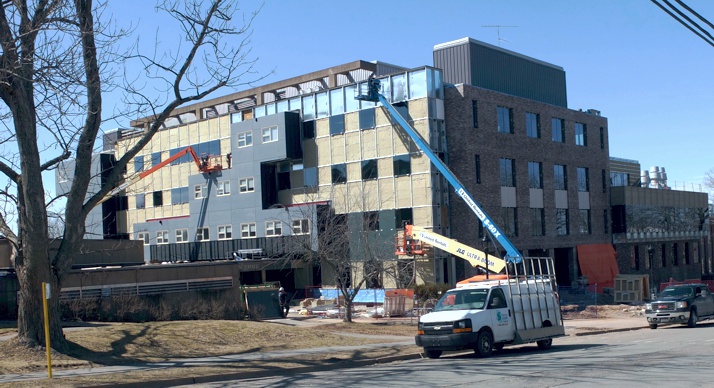 Fifteen Acadia students attended the annual Earth Ring ceremony sponsored by Geoscientists Nova Scotia and held at the end of the winter term at Dalhousie University. 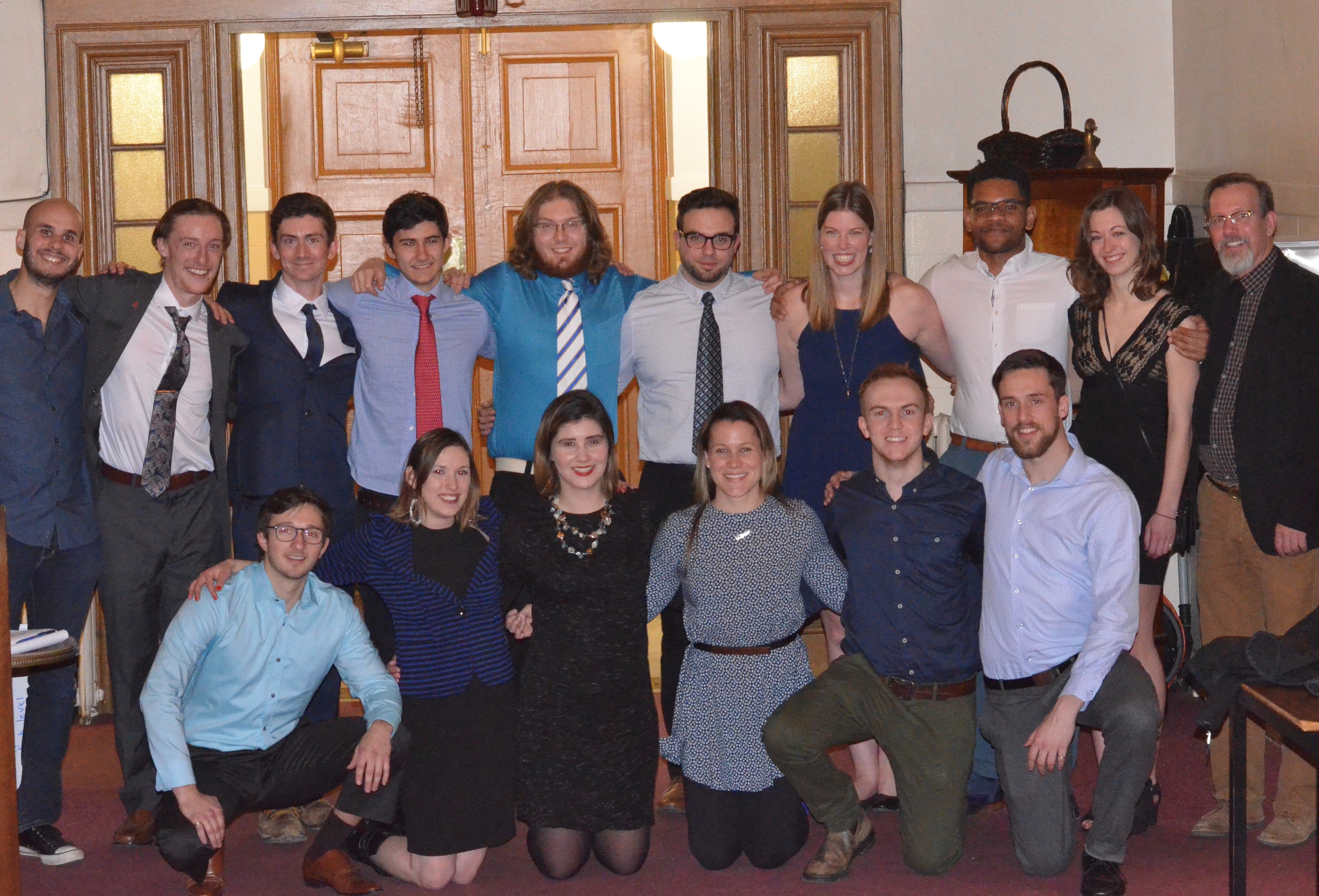 As the school year comes to an end, ESSA (Environmental Science Students Association) organized a final banquet for the department, inviting both ESSA and Fletcher Club members to join. Over 50 students, professors and guests gathered in Clark Commons for the event. 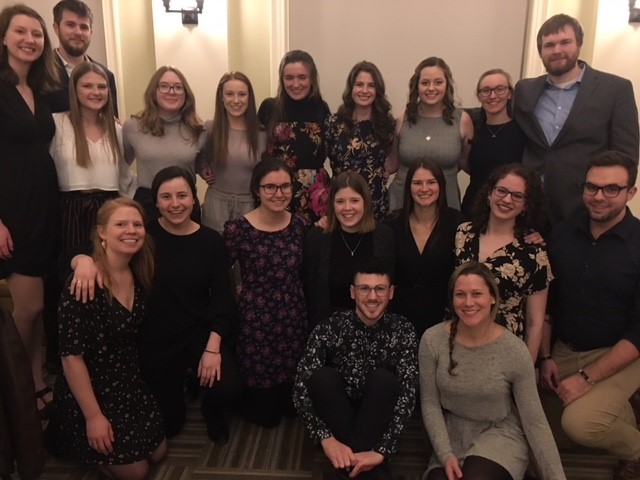 ESSA invited three alumnae to address the gathering - Monica Reed, Emily Walker and Kaycee Morrison clearly enjoyed reminiscing about their time at Acadia, revealed some their subsequent peregrinations, and offered words of advice to those still in programs. 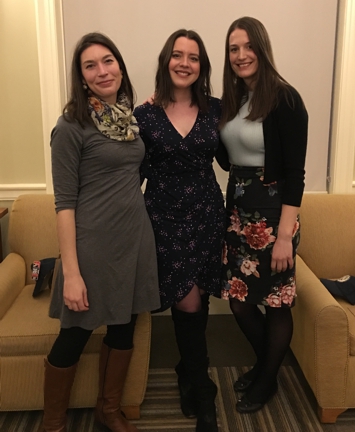 At the event, students who made their mark (mostly in a good way!) in the past year were also recognised: 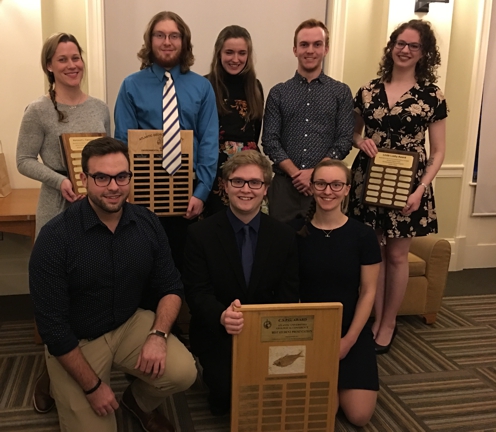 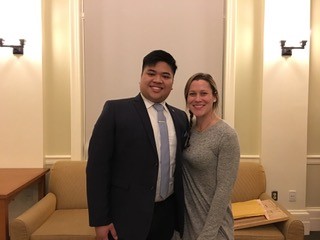 Special thanks to Anthony Chu for always being there with his camera!

Congratulations to all eleven Acadia students who attended the Science Atlantic (Environment) conference at Mt. Allison University on 16-18 March, accompanied by lecturer Sara Klapstein. Three of the seven awards went to Acadia presenters: 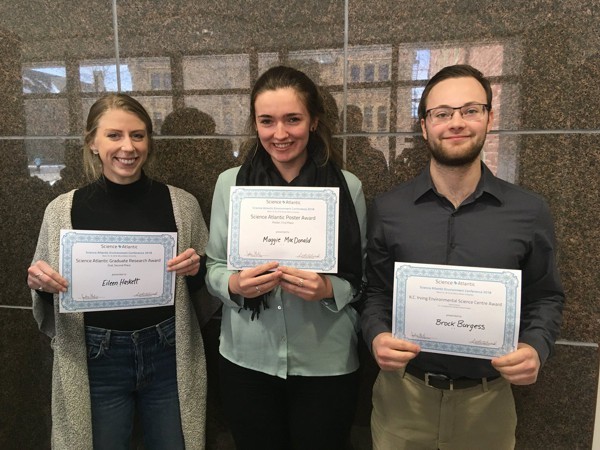 The whole Acadia delegation managed to get together for a group photo: 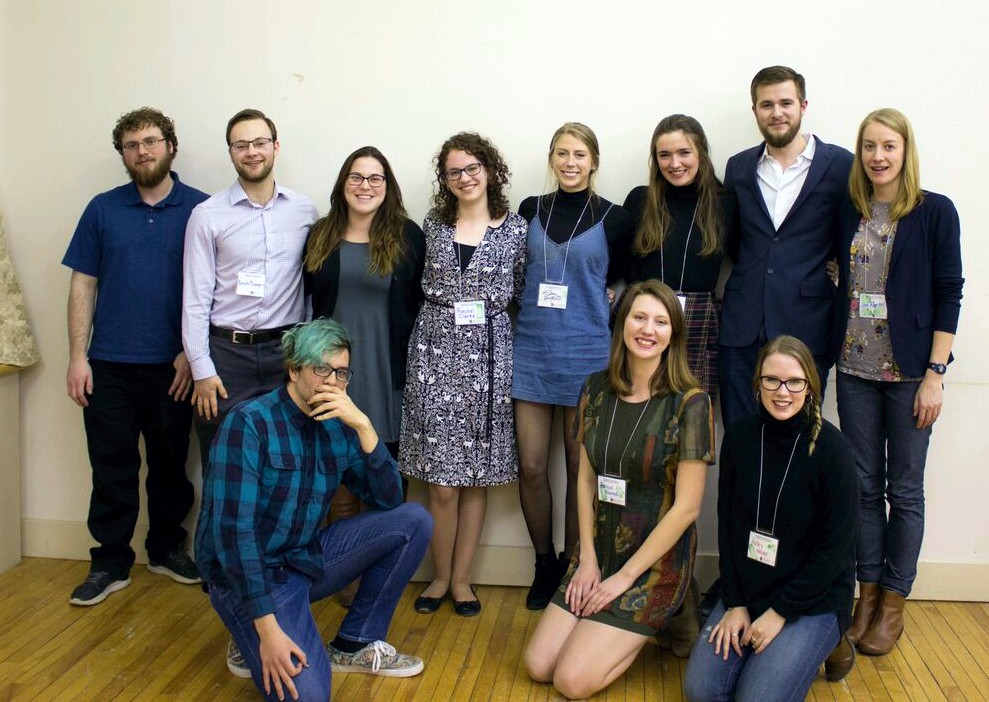 Surprisingly little green considering it was the 17th March!

Preparing for the Bermuda field school

Students in the GEOL 4303 course, Carbonate Sedimentology Field School, are practising their underwater skills in the Acadia pool, to be ready for the exploration of the ocean in Bermuda at the end of April. 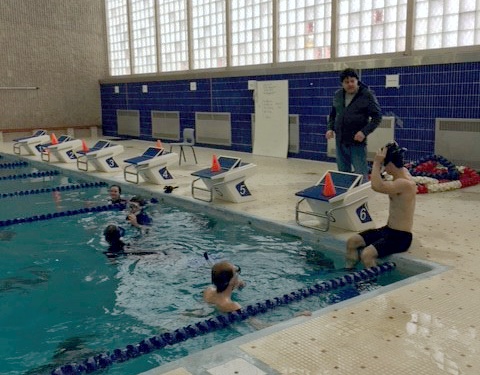 The 44th Colloquium and Annual General Meeting of the Atlantic Geoscience Society were held at the Holiday Inn, Truro, Nova Scotia, on February 2 to 3, 2018. Nearly 200 participants enjoyed a full and diverse program pushing the boundaries of geoscience in all its branches. As usual, the event was well attended by industry, government and university participants, including 4 professors and 26 students from Acadia, and many former Acadia students.

This year’s Colloquium started on Friday morning with two well-attended, day-long workshops: (1) Your Career and Public Reporting - A QP Short Course for Students (& others) by Amy Tizzard, Acadia grad of 2003, and sponsored by Geoscientists Nova Scotia and (2) Subsurface Methods - How to use and interpret drill-hole data and other subsurface data for both industry and academia by Robin Adair, outgoing president of the AGS. Poster displays started late Friday afternoon and remained available to view until late Saturday afternoon. Three concurrent sessions ran Friday evening: (1) Rocks, maps, and tectonic models, organized by Sandra Barr and adjunct professors Chris White and Deanne van Rooyen; (2) Advances in Assessing Arctic Geohazards; and (3) a General Session on Igneous rocks, mineralogy and mineral deposits. A highlight of the exhibits was the display of the recent compilations of new geological maps of Southwest Nova Scotia by Chris White, and Cape Breton Island, featuring decades of work by Sandra Barr, Chris White and many Acadia students and faculty. 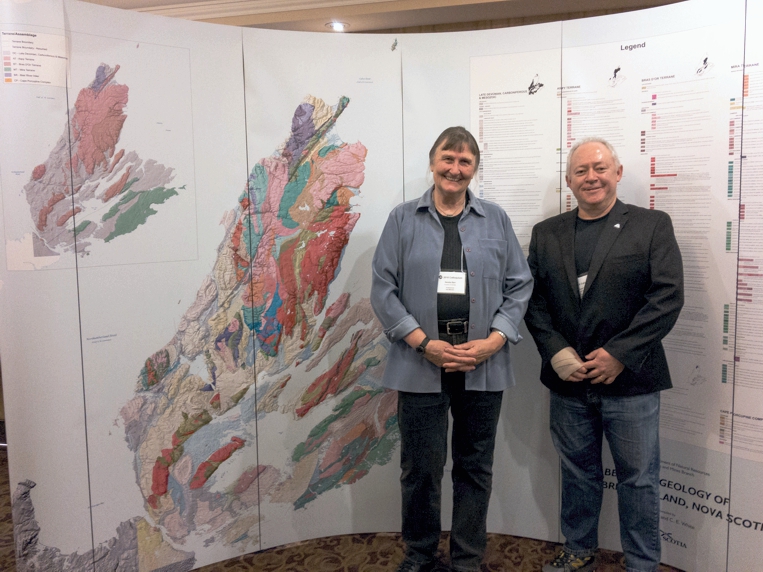 Saturday’s events started early with several concurrent sessions including: Records of Environmental Change from the Atlantic Provinces and Beyond, organized by Ian Spooner and Dewey Dunnington; Basin-forming Processes during Supercontinent Assembly: New insights from the Devono-Permian Record of Atlantic Canada; The Meguma Terrane: its place in the Appalachian Orogen and Beyond; Paleontology and Sedimentology in the Maritimes and Beyond; AGS Outreach Innovations: Past, Present and Future; Methane Emissions from Legacy Fossil Fuel Sites in the Maritimes; Petroleum Geoscience on the Atlantic Margin; and a General Session on Techniques in Earth Science.

Baillie Holmes speaking on Application of the paleolimnological method in the environmental assessment of effluent-influenced freshwater sediment: an example from northern Nova Scotia (photo: Anthony Chu).

Kirklyn Davidson speaking on Application of the paleolimnological method in the environmental assessment of estuarine sediments in a pulp effluent receiving pond: an example from Northern Nova Scotia (photo: Anthony Chu).

Max Chipman speaking on New insights into a brackish Carboniferous ecosystem through the coprolites of the Joggins Formation, Nova Scotia (photo: Anthony Chu).

Saturday evening was the Awards Banquet and Social where following dinner several prestigious AGS awards were presented in recognition of worthy student presentations and professional accomplishments. 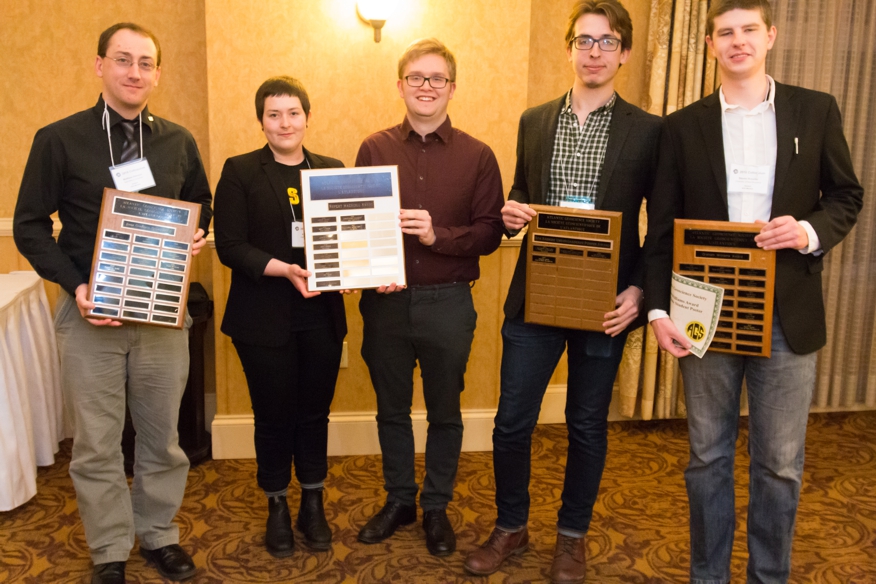 The Rupert MacNeill Award for best undergraduate student oral presentation was split between two top talks: Max Chipman (Acadia University) and his co-authors Melissa Grey and Peir Pufahl for his talk “New insights into a brackish Carboniferous ecosystem through the coprolites of the Joggins Formation, Nova Scotia,” and Kate Woods (Dalhousie University) and her co-author James Brenan for her talk “An experimental study of the effect of water on chromite saturation in komatiite (photo: Anthony Chu).

The new Nelly Koziel Award, given to a person who has recently made a significant contribution to geoscience in the Atlantic Provinces, beyond the call of duty, was awarded in recognition of Nelly Koziel, former treasurer of the Society, and long-term AGS volunteer who staffed the sales table at colloquia, the Nova Scotia Gem and Mineral Show and many other events. The inaugural award was made to Nikole Bingham-Koslowski of the Geological Survey of Canada (Atlantic), who ably and assumed the role of treasurer following Nelly’s death last year (photo: Anthony Chu).

The Distinguished Scientist Award - Gesner Medal, given to a person who developed and promoted the advancement of geoscience in the Atlantic Region in any field of geology, was awarded to Reginald Wilson (retired from the New Brunswick Geological Surveys Branch) (photo: Anthony Chu).

After the awards, the guest speaker Deanne van Rooyen (Cape Breton University) gave an entertaining talk entitled “Folds, furs, and flies: Adventures in Northern research” about her exploits in northern Quebec and Labrador.

This was followed by the annual AGS Kitchen Party and open mike, showcasing the instrumental and voice talents of several members of the Mud Creek Boys and other AGS members. 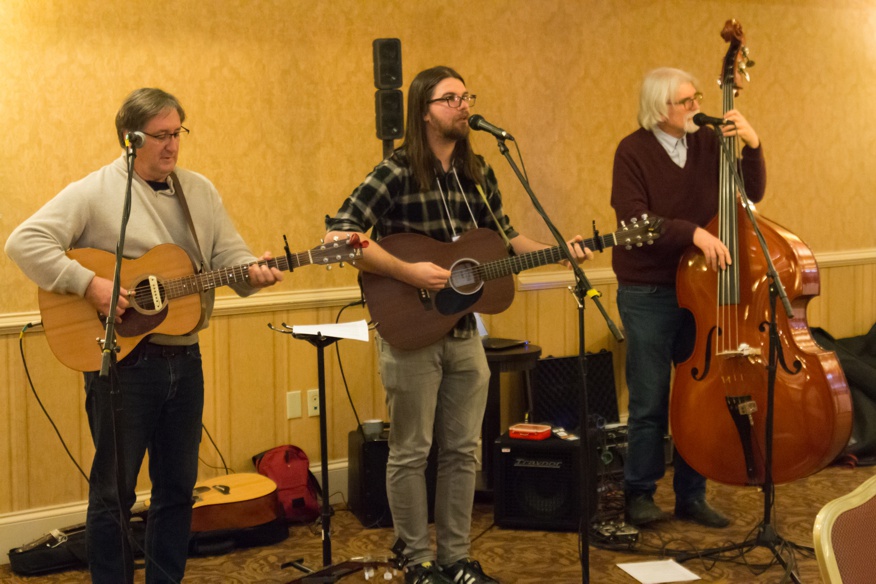