The annual departmental field trip around the periphery of the Meguma terrane of southern Nova Scotia took place on April 22-23.  Acadia students and professor Sandra Barr were joined by Atlantic Gold Corporation geologists (including three Acadia graduates) and Chris White of the NS Department of Energy and Mines.

On Day 1, the group examined metasedimentary rocks of the Goldenville and Halifax groups at low to high metamorphic grades, as well as some of the granitoid plutons and Shelburne gabbroic dyke that intruded them between Dublin Shore and Pubnico. After overnighting in Yarmouth, the second day was spent looking at rocks northwest of the Chebogue Point shear zone, including the Goldenville and Halifax groups and metavolcanic and metasedimentary rocks of the Silurian White Rock Formation. Although rain and fog persisted through both days of the trip, participants remained enthusiastic, noting that many of the rocks look better when wet. We are grateful to Atlantic Gold Corporation for covering many of the costs of the trip. 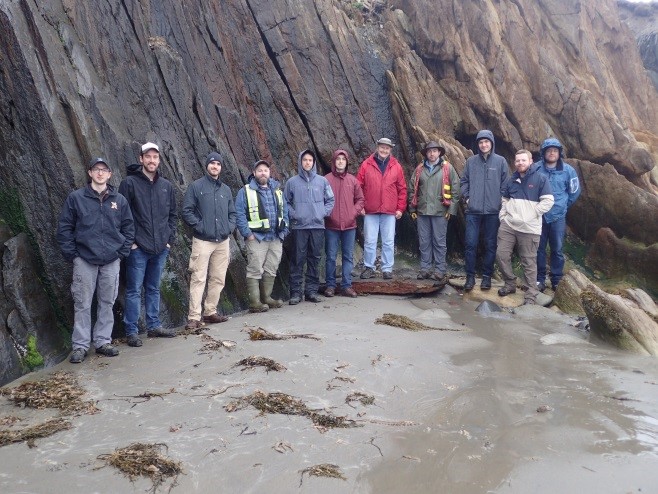 Field trip participants at the contact between dark grey slate of the Bear River Formation of the Halifax Group (left) and pale brown felsic tuff of the White Rock Formation (right) on the beach at Cape St. Mary.