Sandra Barr is awarded the 2021 CFES Mentorship Medal for her role in training several generations of geology students, and her contribution to the advancement of the geological understanding of the Northern Appalachians in Atlantic Canada. 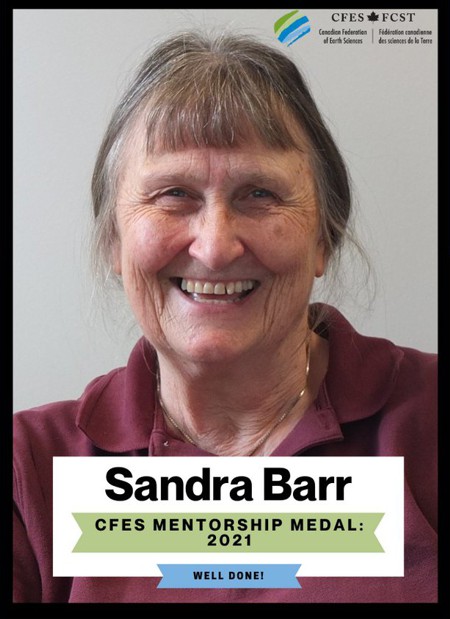 The CFES mentorship award was created in 2008 to recognize the sustained and inspirational mentorship of colleagues and employees including peers, graduate students, undergraduate students and technicians. The award was set up in honour of Paul F. Williams, a geologist known for scientific and mentoring excellence, candour and integrity.

Mentorship is recognized as a critical part of professional and academic development and is vital to the health of any professional community. With this award, CFES/ recognizes an earth scientist from Canadian industry, academia or government. The award is given annually, provided someone who meets the criterion is nominated. The sole criterion for the award is excellence in mentoring over a sustained period of time.

Sandra has taught at Acadia since the 1970s, offering courses in igneous petrology, tectonics, Appalachian geology, as well as the core courses for first-year Geology. In addition she has supervised 50 BSc honours theses and 60 MSc thesis over her career. Congratulations Sandra!