Acadia environmental science student Sarah Stewart’s love of the ocean has been a lifelong relationship. In fact, she loves it so much she’s made it her education, research and future career. 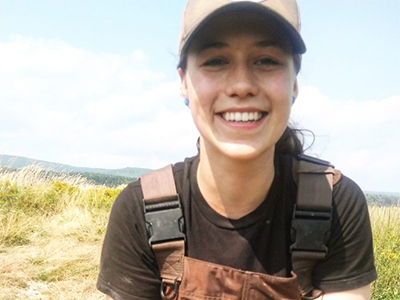 Sarah attended her first Science Atlantic Environment Conference at St. Francis Xavier University this winter and was the recipient of the second place Undergraduate Research Award for an oral presentation.

Sarah has recently completed her honours thesis under the supervision of Mike Stokesbury, where she made significant discoveries on the feeding habits of the anadromous alewife which travels from the Atlantic Ocean to the freshwater lakes of Aulac, NB during spawning migration. “It was previously thought that the fish don’t feed in fresh water when they are spawning because they are more focused on spawning. But I thought that was weird because they are going to need an energy source,” Sarah said. Her findings prove her suspicions were correct: “They do eat when they are spawning. They do a lot of filter feeding, eat zooplankton and opportunistically feed on larger macro-invertebrates.”

Sarah is looking forward to graduating this spring and is pursuing career opportunities in marine biology in the Maritime provinces.