Acadia University has appointed Dr. David Duke as the University Marshal just ahead of the 2022 Convocation, set for May 8 and 9. Duke, who is head of the History and Classics department, will take over the position held by Dr. Rob Raeside, head of the Earth and Environmental Science department, since 2007.

“As we welcome David to this prestigious role for Convocation, we heartily thank Rob for his dedication to the University and its most significant tradition,” says Dr. Peter Ricketts, Acadia’s President and Vice-Chancellor. “Convocation calls our community together to acknowledge the achievements of our graduands, and it is the ultimate celebration for Acadia as a community.”

Duke is no stranger to Convocation at Acadia. He has served as an assistant marshal since the fall of 2004. He says there is something “genuinely beautiful, inspirational, and full of meaning in the line of graduands marching up Perkin Way on a bright, sunny day,” adding that it is also fulfilling to see the graduates spill out of Convocation Hall to find family, friends, and professors on the Quad when the formal ceremony ends.

“To me, Convocation is one of the most precious and important days of the academic calendar,” says Duke. “It is the moment when the University says to its students, ‘Congratulations. Now go into the world and practise what you've learned here and make the world a better place by your being in it.’ Convocation is a moment of great importance and pride both for we who remain at Acadia and for those who take Acadia around the world as alumni.”

The University Marshal has various duties, among them helping graduands prepare to cross the stage, directing the Convocation ceremony, and carrying in the University mace.

The University mace, a gift of the graduating class of 1948, is carried at the head of the procession that leads graduands into Convocation Hall. Made of turned walnut, the Mace bears intricate representations of the history, location, and traditions of Acadia. Included in its design are Nova Scotia granite, amethyst, and, discretely, the figure 1948 and the motto of that class. When not in use for ceremonial occasions, the mace is displayed in the President's Office.

Ceremonial maces are used by governing bodies worldwide, including the Government House in Nova Scotia and the Canadian Parliament.

Raeside began his Convocation duties as an assistant marshal in 1992, upon an invitation to “help out this year” from then-marshal Dr. Bruce Matthews.

“When Bruce retired, Maurice Tugwell took over, but in 2005 he lost his voice after the first ceremony and asked me to step in to finish the spring convocation ceremonies. I must have got it right as I was appointed the University Marshal following Maurice’s resignation,” recalls Raeside.

As he steps away from the marshal role, Raeside takes with him fond memories.

“I will always remember the sea of happy and excited faces in front of me in Convocation Hall, the nervousness of their ascent toward the stage and those deep breaths I hear behind me as the names are called and they start to cross the stage,” he says.

In addition to celebrating with the grad classes, Raeside says that he truly valued the opportunity to work with a diverse cross-section of the university community to make convocation happen. “They may have been committee meetings, but for a professor shuttered in Huggins, they were a window into the operations of the whole university.” 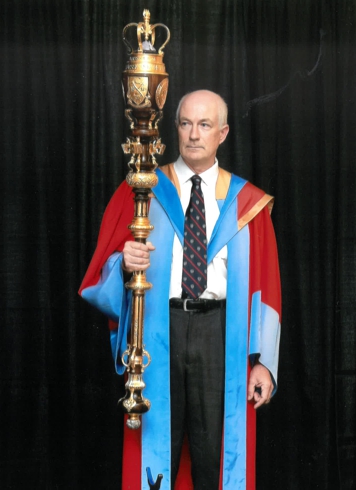