A Whale of a Tale is arriving on Middle Dyke Road, Kings County, May 4th, 2 p.m. 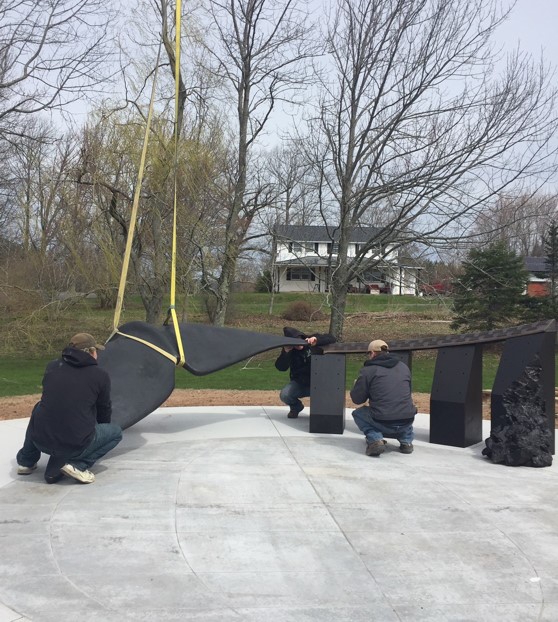 Kings County, NS: Thanks to a generous start-up amount from a donor and support from three levels of government, a large bronze monument narrating the story of Dr. Abraham Pineo Gesner, the ‘Father of the Petroleum Industry’ is to be unveiled on Saturday, May 4, at 2 p.m.

Dr. Allen Eaves, President and CEO of Stemcell Technologies, is that donor. When he stumbled upon an inconspicuous plaque about Abraham Gesner at Chipmans Corner, he immediately thought, “there must be a better way to recognize a Nova Scotian whose work changed the world.”

Eaves’ promise of fifty percent of production costs lead to the formation of a local committee to find the remainder required. Canadian Heritage and Multiculturalism, through its Arts and Heritage program contributed $158,000.

“The Government of Canada is proud to support commemorative projects such as this, which highlight significant milestones in the history of our communities,” said the Honourable Pablo Rodriguez, Minister of Canadian Heritage and Multiculturalism. “These projects remind us of the people, places and events that have shaped our great country. We are delighted to help create a lasting legacy for Kings County and its residents.”

The production of a multi-dimensional sculpture by Ruth Abernethy, featuring Gesner’s scientific contributions, his life, and his societal concerns, is now complete. A licence from Parks Canada permits the bronze to be installed on the Gesner commemorative site, which is located next to the home where he was born in 1797.

Abernethy says, “You don’t usually equate a whale’s tail with petroleum, but that is where my design began.” She describes Gesner as, “A man beyond his time, a family man, and someone you could warm your hands on.”

Her creation demonstrates how the invention of kerosene decreased the need to hunt the right whale for its oil and led to the distillation of fuels and the invention of many products like asphalt and plastics. In both official languages, the monument chronicles Gesner’s explorations of the physical landscape, agriculture, medicine, his positive relationships and concern for the Mi’kmaq people, and his links to emerging industries.

Importantly, the Government of Canada is also providing a $36,747 non-repayable contribution, through the Atlantic Canada Opportunities Agency (ACOA), to help promote this extraordinary monument to visitors. The installation will be the centrepiece of a multi-location digital arts and culture trail.

“The trail, with its 18 exhibits, showcases the heritage of the Annapolis Valley and the unique work of local artisans,” said the Honourable Bernadette Jordan, Minister of Rural Economic Development, on behalf of the Honourable Navdeep Bains, Minister of Innovation, Science and Economic Development and Minister responsible for ACOA. “Using innovative digital-based technology creates a rich, interactive experience that will encourage visitors to travel to rural communities year-round and extend their stays in the area, promoting regional economic growth.”

Measuring an impressive 23 feet in diameter, it will be unveiled to the public at a ceremony to be held at 292 Middle Dyke Road, on Saturday, May 4, at 2 p.m.

Councillor Pauline Raven, Chair of the Gesner Organizing Committee, believes attendees will be thrilled by the scope and beauty of this project and “able to put their hands on history.”

The festivities will be hosted by Mayor Peter Muttart who is expressing: “Gratitude for everyone’s determination to see this to fruition, particularly Dr. Eaves who, cognizant of his own Kings County roots, employed his love of arts, culture and innovation, to enhance our region.”

The ceremony will include: a proclamation by honorary town crier Lloyd Smith; music by honorary bagpiper Ed Coleman, both for the Municipality of the County of Kings; the unveiling; a short drama; an overview by Abernethy; and much more. Come one, come all.

In the event of inclement weather, a quick unveiling will be followed by presentations at the Port Williams Community Centre, 1045 Highway 358 (Main Street), Port Williams, NS B0P 1T0.