Josh Caines updated us on his exploits with the Newfoundland-based company PanGeo Subsea as he works out of Amsterdam in the North Sea. After graduating from Acadia with a BScH in Geology in 2013, Josh attended the Centre of Geographic Sciences and acquired an Advanced Diploma in Marine Geomatics. Following graduation, he moved to Texas to pursue a career as a geophysical technician with Dawson Geophysical. The position involved survey design and data processing of seismic projects for oil and gas exploration. He worked with this company for three years and traveled throughout the US and Canada. One unique assignment took him to Oak Island, Nova Scotia, to do survey work for a TV program from the History Channel, “The Curse of Oak Island”. The work involved designing and surveying a seismic program in search of the tunnels that are thought to hold lost treasure.

In the summer of 2018 Josh returned to Canada to accept a position as Offshore Geoscientist for Pangeo Subsea Ltd. of Newfoundland, working in the field of marine construction. His current position requires him to travel to Europe regularly and work offshore on ROV equipped survey vessels. The position involves subsurface feature detection using shallow acoustic systems. The work involves interpretion of 3D seismic data, including detection of unexploded World War two era ordinance to allow for safe dredging operations and the installation of subsea cables. 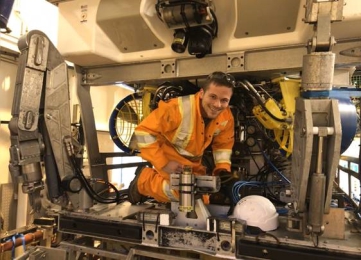 The work is done using a remotely operated vehicle (ROV), which obviously requires Josh to maintain it. 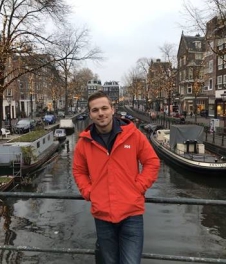 In his off-time, he enjoys travelling in Europe or spending time in Vancouver where he kayaks in the summer and downhill skis in the winter.