Sandra Barr and Martha Hickman-Hild have released a new volume in the series of geological guides to the Atlantic Provinces. Originally started by Martha Hickman-Hild for the Geology of Newfoundland, she teamed up with Sandra Barr to complete the Geology of Nova Scotia in 2015. Now the pair have released "Geology of New Brunswick and Prince Edward Island: Touring through time at 44 scenic sites."

The new volume provides a colourful, easy-to-use guide, which tells the story of the geological history of New Brunswick and Prince Edward Island through a series of visits to beautiful, fascinating destinations all across the two provinces. 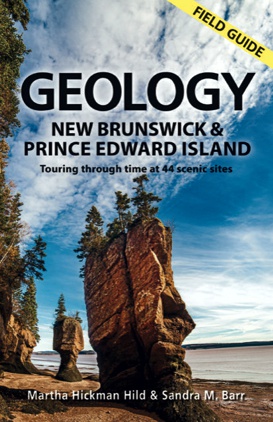 The books originally arrived in the early spring, with plans to have an official release at a convenient time and location, but travel restrictions because of the pandemic have put paid to that option. The books have been eagerly picked up by people staycationing in the "Atlantic bubble", providing maps, GPS waypoints, travel directions, a trip planner, and intriguing nuggets about the rocks and their locations. The book makes it easy for anyone to visit breathtaking, informative places both on and off the beaten path.

The book can be found in bookshops or from the Atlantic Geoscience Society's online store.

Through the summer Sandra and Martha have been interviewed on radio several times - CBC Maritime Noon recorded an interview at https://www.cbc.ca/listen/live-radio/1-38-maritime-noon/clip/15787089-pei-covid-19-cases-pandemic-waltz-geological-features-maritimes (the segment starts at around 13 minutes). In addition they have participated on CBC shows in Charlottetown and Moncton, and Sandra has provided four Tuesday morning slots for CBC Fredericton.