A very successful Colloquium was held by the Atlantic Geoscience Society on 5-6 February, 2021. The event was organized online, with a wide range of activities, including two professional short courses, an afternoon workshop, five thematic special sessions, and the closing awards "banquet". Registration for the event totalled 197, with 53 oral papers and 10 poster presentations.

Special sessions were arranged on the following topics:
- Developments in Mineral Resources Research in the Northern Appalachians, by Kevin Neyedley, Aaron Bustard and Mitch Kerr
- Sedimentological and Paleontological Investigations from the Onshore and Offshore Realms, by Nikole Bingham-Koslowski and Lynn Dafoe
- Karst Research in Atlantic Canada, by Mo Snyder, Amy Tizzard and Tim Fedak
- Defining the Controls on Onshore and Offshore Pliocene-Quaternary Process, by John Gosse
- Developments in Geoscience Education, by the AGS Education Committee, chaired by Tracy Webb

The short courses and workshop were very successful, with nearly half the delegates participating in at least, and some in two of these events:
- Short Course: Applications of GIS to Earth Science, offered by Robin Adair, University of New Brunswick
- Short Course: QAQC Methods in Geochemical Research and Mineral Exploration, with a Focus on Gold Assay Quality Control, offered by Cliff Stanley, Acadia University
- Workshop: Looking to the Future; Equity, Diversity and Inclusion as a Way of Being in our Discipline, organized by Anne-Marie Ryan (Dalhousie) and Deanne van Rooyen (Cape Breton University). 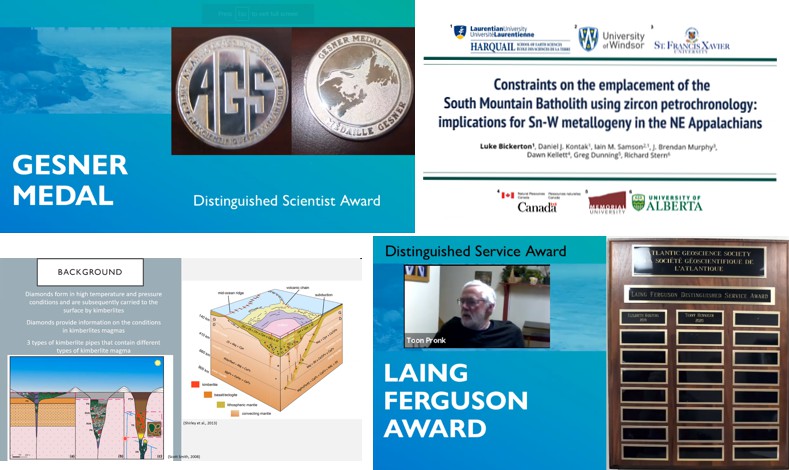 Following the presentations, the closing banquet was organized by incoming president Anne-Marie Ryan (Dalhousie University) who announced the Society's awards.

The Nelly Koziel Award is given to a person who recently has made a significant contribution to geoscience, beyond the call of duty, in the Atlantic Provinces. It was awarded to out-going president Dave Lentz (UNB) in recognition of the efforts he made to keep the geoscience community connected through weekly Zoom webinars throughout the past year.

The Laing Ferguson Distinguished Service Award is given in recognition of exceptional and altruistic contributions to the Atlantic Geoscience Society and/or to foster public appreciation of Atlantic Geoscience over a long period of time. It was awarded to Toon Pronk, New Brunswick Department of Natural Resources and Energy Development in recognition of his many years of work in the field of geoscience education.

The Gesner Medal is awarded to a person who has, through their own efforts (maps, publications, memoirs, etc.) developed and promoted the advancement of geoscience in the Atlantic Region in any field of geology. This year it was given to Erwin Zodrow, formerly at Cape Breton University, who has spent a lifetime research the Carboniferous paleobotany of the Sydney coalfields.

Following the awards, thanks were expressed to this year's organizers of the Colloquium, Rob Raeside, Chris White and Donnelly Archibald, and a call was made to reconvene in February 2022 in Fredericton.